The war in Georgia has been all about politics. But what most people don’t know is the big civilian suffering taking place. Many cities were bombed to the ground, thousands were killed and today there are over 280.000 refugees living in camps around the country. The brief from United Nations was to make people aware of the situation, and collect as much money as possible. Since their main objective was to make people aware of the suffering, showing true evidences of war couldn’t make the campaign more relevant and authentic. To bring out the truth and make their message as authentic as possible, they (the creative team) decided to go to Georgia. Among the bombed houses and villages, they collected personal belongings to the victims of the war. They also visited families, and received things that had belonged to the close relatives they lost. Together with a short explanation and background story, the physical objects were then placed in billboards around Sweden. Like true evidence of the war. In the copy they also explained that the suffering in Georgia is for real. That it has only begun and that the refugees are in an urgent need of help. After being confronted with the billboards, people reacted very strongly. Many stopped and looked at the installations for several minutes. Some even started to cry. The strong impact resulted in hundreds of sms:es only on the first day (one sms means a contribution of 5 €). The campaign was also noticed on national TV and different newspapers. Since the campaign is still up and running, no exact numbers has yet been measured or confirmed. But the economical goals have already been highly exceeded. 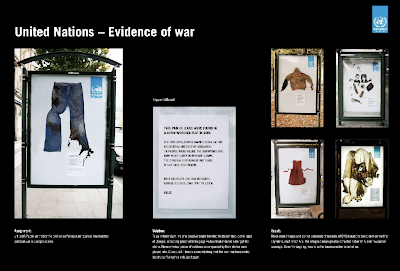