Clearly demonstrate that Pattex Power Tape is an extremely strong multi-purpose adhesive tape that not only sticks to virtually any surface but also resists extreme pressure. In order to demonstrate the product’s benefits, billboards throughout the country were turned into cages for wild animals. However, instead of using metal bars to protect their visitors they used Pattex Power Tape. Dozens of rolls of tape hanging at the bottom of the billboard often had to be replaced several times a day for those interested in trying the product themselves. With an average number of 525,000 contacts during the one-week campaign spectators were surprised by this clear example of how strong Pattex Power Tape actually is. Over 20,000 samples were taken by potential customers. Pattex Power Tape was one of the most successful brands in Henkel’s 2007 adhesive portfolio. 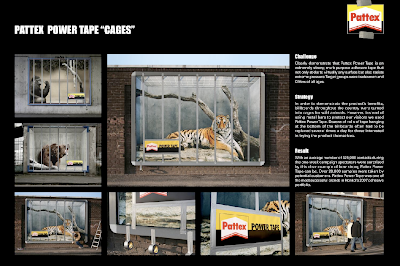