The core values of the Norrlands Guld Brand are about male bonding and friendship. Their task was to bring new vitality into to this successful concept, in order to reach a slightly younger target group and give them something to interact with and talk about. Together with Örjan Andersson (Cheap Monday) they created a premium quality jeans label called Norrlands Guld Jeans. The jeans were branded from buttons to labels. A beer opener were also sewn into the jeans. They were priced at $150.00 and sold in jeans stores all over Sweden. As Norrlands Guld Beer is the market leader in Sweden, the whole idea behind the Jeans campaign was to promote and launch the jeans label like an ordinary jeans label, and not to talk about the beer at all. Advertising in newspapers and fashion magazines. PR was sent out to newspapers and fashion magazines. Special press preview at the Copenhagen Fashion Week. A TV-commercial was aired during Stockholm Fashion Week, featuring the Norrlands Guld character “Ingemar” wearing the Jeans, stumbling in on a cat-walk by accident. The jeans were sold in stores all over Sweden and online. “When you want to be yourself for a moment has been the tag line for Sweden’s best selling beer NORRLANDS GULD for decades. The jeans culture is a perfect match. “When you want to be yourself”, relax and have a beer, you put on a pair of jeans. They got lots of press in all major newspapers. Blogs, specially fashion blogs, were commenting on the jeans, almost all comments were positive. They were all over the media. And on the day when the sales stated people were queueing outside the stores in the morning of the sales start. The online store caliroots.com went down at midnight when the sales started. The Jeans sold out in two days. Norrlands Guld Beer became the best selling beer at Systembolaget (the Swedish monopoly). 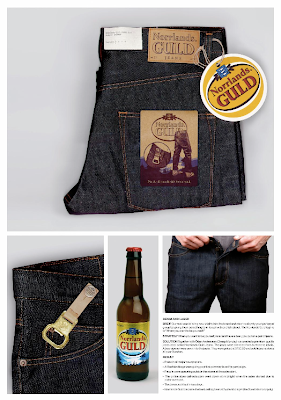