By using this new advertising medium they were able to reach their audience at exactly the moment they were doing what they were trying to encourage them not to do. An increase of almost 50% in calls to the Quit helpline were registered in the first week and, due to the first use of advertising in this medium, press coverage was quick to highlight the 'cleverness of the message, within the environment' and portray the execution as 'a wonderful shock tactic that should force even the hardened smoker to quit'. Quit now plan to roll out as many execution of the ad as they can possibly afford in the hope that more smokers will become aware of the potential dangers. Quit is an independent charity whose aim is to save lives by helping smokers to stop. Stopping smoking is not easy, but it can be done. Their task was to find a new and innovative way to encourage smokers to make that 'first step' and contact Quit for more information on how best they could finally give up the habit. Since the introduction of the smoking ban throughout the UK, to alleviate cigarette litter, 'adbins' have sprung up all over London. What better way to engage smokers, than to communicate with them when they are actually smoking? Their X-ray of the lungs, gradually being filled with ash and cigarette butts, served to shock smokers into realising exactly what harm they were doing to their bodies. 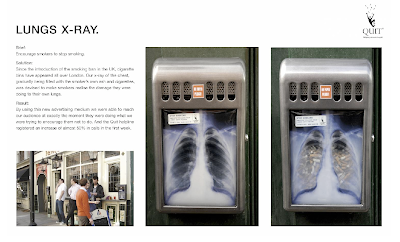