The pre-launch campaign for the new Ford Fiesta. To do so they created a limited edition of car covers ('housses') designed by leading contemporary Belgian designers. The five designs were selected from the entries to an open competition. On the night of July 21st one thousand covers were placed over parked cars throughout Belgium. Each cover contained an invitation to pre-order a limited edition Fiesta Faemehousse. A micro site contained details of the design and cover owners to trade their covers: one housse was selling for 51 euro. In the Belgian market it had three objectives: to sell one thousand new fiesta's before the car was in local dealerships, to dramatically alter perceptions of the Fiesta as a car for young urban adults, and to stimulate media interest in the car before its design was revealed. The micro site achieved 168,000 hits, a record for Ford in Belgium. The Fiesta Famehousse sold out in just 4 weeks, achieving sales levels unseen outside of Belgium's traditional Motor Show month. Significantly there was also a marked shift towards young urban adults amongst early purchasers. 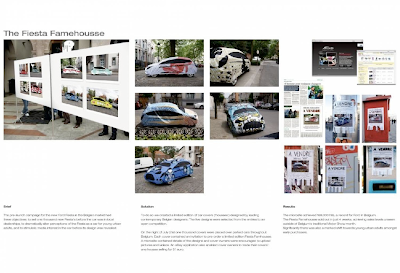