International Festival of Theatres for Disabled, wanted to be perceived as a cultural phenomenon, not a charity act. The majority doesn’t perceive the disabled as actors. So, they made theater posters out of things that people don’t perceive as posters. A joint team of agency and the actors themselves created over 70 pieces of original artwork Each of them read: You’ve never seen such a poster. You’ve never seen such actors, either. A sticker put on each object carried additional information. In the same fashion, they made flyers out of handkerchiefs. All these materials were placed in various venues where our target goes: clubs, cafes, etc. A survey by Proteatr revealed that over 50% of audience came to see the performance because of our campaign. (For the two days, the house was full!) P.S. They were contacted by Hora, the Swiss partners of Proteatr, who asked them to develop their next campaign. 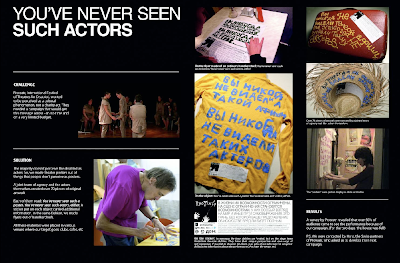