Already 1 of 5 children in Switzerland is overweight. Their intention was to show parents and their children that “it takes little to change a lot” (campaign slogan), i.e. to reach a healthy bodyweight. In Switzerland, much is done to counteract the worrying trend of obesity in children. For their campaign, they chose the place where addressing their target audience would be easiest and most effective: on the playground. To convey their message, they took a number of playgrounds all over Switzerland and systematically refitted their swings with truly SUPERSIZED chains or ropes – a change that caught the eye of anyone playing there, or even just passing by. On the swings’ seats they became more explicit by reminding anyone in written form that “Being overweight is not destiny”. In addition, people were referred to Promotion Santé Suisse’s website, where a large number of useful tips were offered to anyone interested in the issue, in particular parents and their children. This whole set-up allowed them to communicate their message in an interactive way, inviting children to become aware of the obesity issue while playing, and at the same time inviting their parents to deal with the problem as well. The media echo created by their campaign was enormous, newspapers, television and radio programmes all covered it, thus creating general awareness for the issue at hand. Debates and discussions were stimulated, their target audience seemed particularly pleased about the playful approach chosen for communicating a basically serious problem. The campaign soon became the talk of the town. 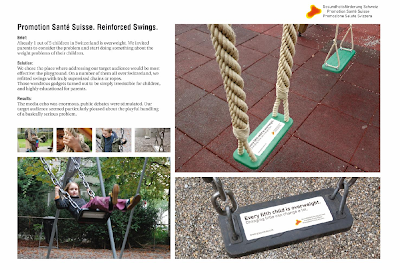 Posted by Marc van Wageningen at 11:27 AM