A cost-efficient idea with great stopping power should inform passers-by in front of the UNICEF information booths about the insidious dangers of landmines and help to raise attention for the work of UNICEF. The stickers strongly reflected the cruel reality of landmines and gave people a strong feeling of wat it was like to become a landmine Victim. Like real landmines the stickers hit people without a warning - only with less lethal consequences. Landmine-stickers with self-adhesive topsides were placed on the floor. They were invisible until they stuck to your feet. While removing them, people discovered the landmine-picture on the bottom side and were informed that in many other countries they would have been mutilated at this moment. The results in numbers: - Visits at the booth doubled compared to 2006 - Sales of UNICEF items at the booths (cards etc.) increased by approx. 20% compared to 2006. 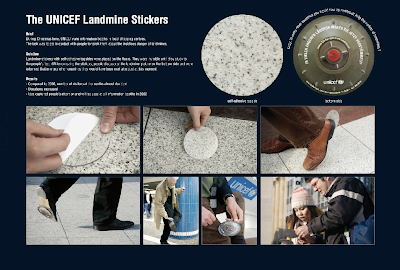