Migros is Switzerlands foremost supermarket chain, so its challenge was to bring their underwear line to a younger audience. In a wide-spread press release Migros announced to advertise their latest underwear worn by real singles, who are looking to meet and find a partner. The story quickly became a topic for the media, already giving the campaign a first ignition. 700 willing models applied and there from 26 where chosen. Following was a campaign that used real life singles modelling the underwear with possibility of the viewer to contact them over their email address. Hundreds of national and international media covered the story about the singles in Migros underwear. The campaign was a topic of conversation for weeks, they added on to that by also launching the singles update - singles that no longer where singles (eg. found someone). Very high media coverage on all levels. The used website www.migrosmodels.ch proved a huge success, with hundreds of messages being send to the single models and also winning different awards (cannes lions, clio, adc swiss and europe etc.) 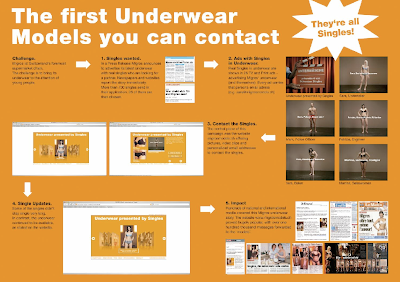