This field marketing action took place right before summer, when the shops started displaying their summer and swimwear collections. The intention was to launch the new Ambre Solaire sun protection line. So, they came up with a non-traditional and indirect idea that crossed the benefits of having a nice healthy tan with the benefits of looking good. The common link was fashion and the uncommon media were shopwindows. They approached fashion stores specialized in outdoor activities (mountain, beach, surf, ski); some unisex but most of them sold women’s clothes due to the product’s target being mainly women who are fashion aware and hence worried about their tanline. The stores had their shopwindows facing the street and were subject to sunlight, so to speak, and if a store were to display mannequins in bikinis or bathing suits, all of them had irregular red stains from too much sun. All except one, which kept its normal ‚flesh’ coloured skin. The link between the normal mannequin and the product was established by a poster placed right next to it, that read: ‚Sun protection never goes out of fashion. Ambre Solaire Garnier. Take care.’ People in general seemed very amused even if they were only windowshopping and, between all the shops, 72% of the shoppers who actually bought any swimwear items in the stores spontaneously asked about the product and if there were any samples; of course, they were given free samples and a leaflet with general sun protection tips. Also, the stores’ employees were often approached by curious members of the public who wanted to know more about the action, so awareness was definitely raised. 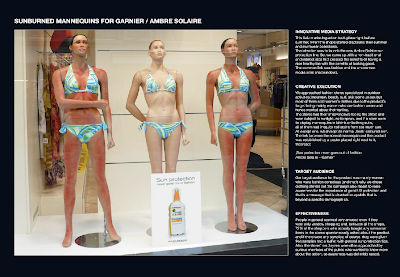 Posted by Marc van Wageningen at 11:59 AM