Adidas wanted to be the # 1 football brand during the UEFA EURO 2008 in Austria and Switzerland, sending their “Impossible is nothing” philosophy far beyond the borders of the 2 countries. To rise above standard advertising chaos, they needed something as monumental and entertaining as the event itself. So they borrowed the city‘s dearest attraction, and converted it into an ambassador for their brand: a 60 meter high, 111 year old ferris wheel in the “Prater” amusement park in Vienna. It was the symbol of the UEFA Euro 2008, welcoming over 4 million visitors a year. A week before the final, adidas was declared by the press the winner of the UEFA Euro 2008 run among sports brands. Recognized by 30 % of the audience, against 12 % for the competitors, reporting an increase of 50 % in the football apparel sales and getting an extra 15 % of the market. They installed a 61 meter tall version of the world‘s # 1 goalkeeper, Petr Cech, with 8 arms spinning along the amusement park‘s ferris wheel. A landmark and a tourist attraction were joined to make an unbeatable goalkeeper you could take a ride with. To complete the experience, they spread thousands of 3D postcards as souvenirs, getting press and public to multiply the reach of the idea, and transforming the launch into a memorable event. Visible within a 2 km radius, it was seen live by over 1 million fans, doubling the number of tickets sold. 5 TV channels and over 25 newspapers, news agencies and portals were there to cover one piece of “advertising”. In a matter of hours, there were over 150 posts in 25 countries on the Internet. Major news titles such as BBC, Bild and USA Today, featured it in their print or online editions. It reached major Brazilian and Argentinean football news, but also the cover of the biggest Hungarian newspaper and Chinese TV. 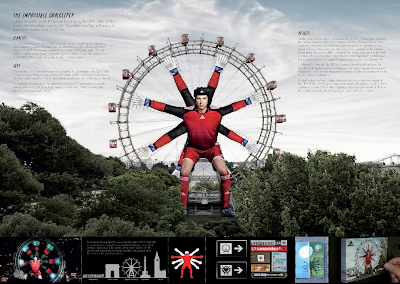