Naturally German flats and appartments are full of messy corners. That's why IKEA produces practical boxes and drawers in all shapes and sizes for all storage needs. Targeted especially at people living in smaller appartments, Frankfurt IKEA asked them to promote their storage solutions with a really BIG outdoor idea. The spectacular three-dimensional installation had an extreme 'stopping power' for passers-by. So it was easy for the promotion people to distribute their catalogues and response-postcards. The idea was to play with the widely recognisable shapes and designs of the Ikea storage range and to put them into a new and surprising context. By redesigning the front of a whole appartment building in one of the busiest streets in Frankfurt with giant-size mock-ups of IKEA drawers and cardboard boxes they made two points: Gaining the highest level of attention and literally linking the product to where it belongs: small flats and appartments. All pedestrians, cyclists and drivers passing the street account for 12.000 contacts on a single day totalling 168.000 contacts within the 2 week promotion period. Local newspaper and ad press covered the promotion and visitors and sales at the two IKEA outlets in Frankfurt increased substantially. The postcard response rate was about 18%. 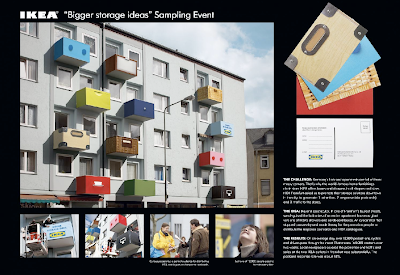