Weeds is a show about a single mum who starts selling pot to make ends meet. It was being shown on Prime, a relatively new channel on New Zealand television. So they needed to get Prime to start challenging the other, more mainstream channels. To promote Weeds, they dressed a real home up as a drug house, complete with a hydroponics room and drug paraphernalia. Then they put it on the market. It was promoted how you would with any house on the market ­ with a full-page ad in the Property Press, a prominent weekly real estate newspaper. The copy was written as a send-up of real estate clichés, and invited interested parties to turn up. When they arrived, a fake real estate agent gave them the full tour. And when the bemused folks left the house, they were given a business card with details about the show. After thumbing their noses at the law, the Open Home, as well as getting one of the highest response rates ever in the area, gained coverage in the New Zealand Herald (New Zealand's largest daily newspaper). It turned Weeds into one of the highest-rating shows on Prime ­ viewership was up 600% over the previous week ­ and helped turn the channel into a main contender. 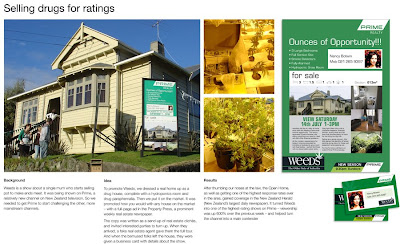 Posted by Marc van Wageningen at 10:52 AM