Amnesty International’s task is to inform the public about the violation of human rights all over the world. The aim of the campaign is to let people know that human rights are being violated just a short flight away. In order to communicate this message, they created a straightforward concept: „It’s not happening here. But it is happening now.“ They delivered this message in one of Switzerland’s most popular TV programs: the weather channel. This non-stop program is broadcast in ski resorts and hotel rooms, showing the current weather in the most beautiful parts of the Swiss countryside. They showed footage of the abuse of human rights in other countries during the broadcast and let two worlds collide. With pictures of famous places and its Swiss traditional music, the weather channel gives the viewer a safe and carefree feeling. Pictures of violence is the last thing the viewer expects in this environment, making this simple message even more powerful. The target audience of Amnesty International is the general public as well as the media. The campaign generated a strong increase in traffic on the AI-website. 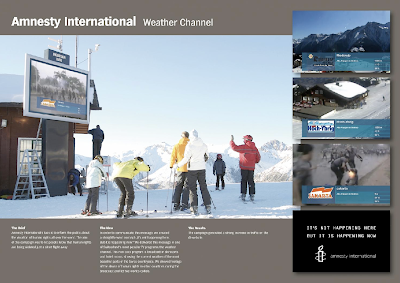 Posted by Marc van Wageningen at 10:58 AM