The Prodis Foundation asked them to write a 30-second ad to communicate that, with the right education, people with Down’s syndrome can be fully integrated into society. After weeks with the kids they realized they could do a lot more things than they could possibly imagine. So they decided that the best way to communicate this message was letting them do their own ad. And they did everything. They came up with ideas and discussed them. They talked to the production company. They decided the casting, the costumes, the settings... They even asked for a celebrity! With every stage of the process they did a teaser ad inviting people to the website www.letusdoit.org where they could find out more about the project. they did radio and print also inviting people to the website. And in the end, they aired their commercial. The results were just beautiful. Overnight, the issue was all over the media. A short film documentary was created featuring this 8 months experience. “Story of a Beautiful Ad” was broadcasted nationwide on prime time: Twice! And many more people learned what they learned when they met these kids. Additionally, the campaign has been awarded the “Corbis Social Justice Award” at the Art Director’s Club of New York, including a $10.000 USD donation for Fundación PRODIS and the possibility of receiving more funds globally through the Corbis website. 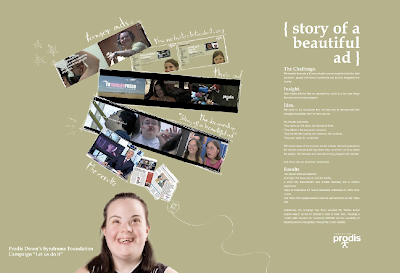