Germany is a country that's crazy about cars. So how do you increase loyalty among users of German Rail's car transport train? The 32 largest German traffic jams had to be researched and respective photos had to be found. Actually distributing the card game via German staff definitely was the easier part. At the beginning of their journey users of German Rail's car transport train were given the 'Monster Congestion Top Trumps'. The game was a most engaging and entertaining way for their travellers (mostly families) to learn that the best way to travel by car is when you're on a train. According to client reports the promotion was a huge success, not only among travellers who were affirmed in their decision at the right point in time, but also within German Rail's organisation where the mocking of car travel substancially increased morale among German Rail staff. 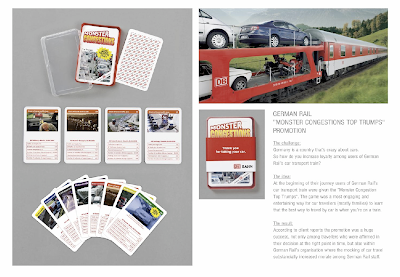