Put attention on the topic of poor children in Africa. Every fourth child dies before it's 5th birthday. But it's only little things that can change a lot: Drinking water, mosquito nets, serums and soap. So they had do develop a campaign which tells the German public that already little donations help? and so finally generate donations. Unicef stands for positive and helpful relief actions. Bitter and fatal facts are always communicated in an intelligent and positive way. So the idea of Pro-Aging was to use the mechanics of “beautiful advertising” for “beautiful things” to call attention to the topic of dying children in Africa. And not to be reproachful, pitiful or evoke a bad conscious. A positive and beautiful campaign, which shows how easy it is to help. In Germany Anti-Aging is a big thing. But in Africa it's all about the opposite, because many children die long before they grow older. That's why they launched the virtual pro-aging-cosmetics series by UNICEF. An aid package with drinking water, mosquito nets, serum and soap was promoted in a cosmetic campaign. (Posters, print ads, promotions etc). In an online shop www.pro-aging-shop.de the products could be virtually bought the prize were donations to UNICEF. So every visitor could combine his individual aid package out of drinking water, serums, soap and mosquito nets. Since there was a public scandal at UNICEF Germany in the period when the campaign was launched, there are no results available. 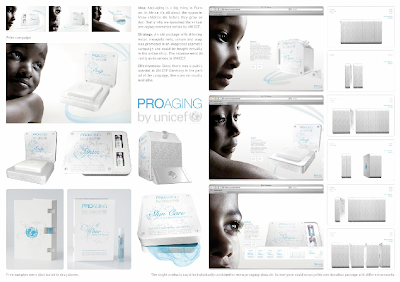