The UEFA EURO 2008 sent out an enormous wave of emotion through Germany. Millions of dedicated fans followed the games, and even as the team was narrowly beaten in the final, the public still stood strong behind them. In recognition of this support, the team wanted to say one last thank you in front of the Brandenburg Gate in Berlin. Their idea was to say Danke (engl. thank you) in a way no other partner could - by creating enormous postcards addressed to the German football team, which the fans could sign and personalise. As the squad arrived in Berlin the day after the Final,they placed 26 mobile billboards around the Brandenburg gate and invited fans to write their own personal message to their football heroes. They simply gave the fans a canvas upon which they could do yo. As a main partner of the German football team, adidas asked them to welcome the team back home and allow the public to express its gratification for players and trainers alike. Over 100.000 fans took part and wrote to the team. Their thank you promotion was not only to be seen live on TV, but also on Germany´s largest internet portal, Spiegel Online, who reported it the same evening. And on the following day, the billboard could be seen throughout national print titles such as BILD, Süddeutsche Zeitung and Die Welt. And ultimately, all 26 signed thank you billboards were converted into actual postcards that were subsequently sent to each member of the national team. 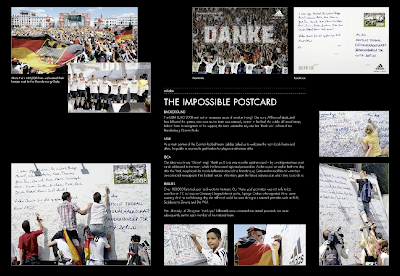