A promotion that can be implemented locally and will draw a lot of attention and attract people to make an appointment at a Sparkasse branch. The Sparkasse is one the biggest banks in Germany, with a branch on almost every street corner. And that’s exactly where they implemented their campaign. In order to draw people’s attention to the expertise of the Sparkasse’s savings specialists, we chose an unusual and eye-catching medium: wishing wells near Sparkasse branches. The campaign did not just attract attention around the wells themselves, but also in the nearby Sparkasse branches. Lots of customers saw the wishing well promotion on their way to the branch. This promotion became a topic of conversation and gave Sparkasse advisors the opportunity to approach the topic of savings accounts. 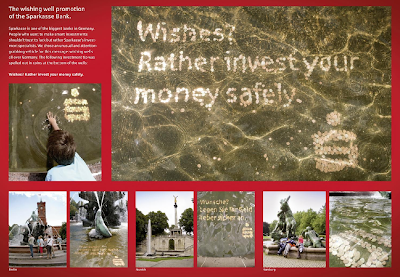