Create awareness for global warming. Create a promotion that communicates this important issue in a relevant but not shocking or destructive way. And don’t pay for media. On August 18, 2007 hundreds of men and women posed naked on Switzerland‘s Aletsch Glacier. Spencer Tunick was on a ladder with a mega phone as he directed the massive crowd of nearly 600 people from all over Europe who were concerned for the environment. He then photographed them on a rocky outcrop overlooking the glacier and finally they had to pose on the ice as he took photos of them lying down. With the development of a „living sculpture“, Spencer Tunick and the agency created a symbolic link between the fragility of the receding glacier and that of human beings. By combining a well-known artist, a well-known landmark and a one-day event this promotional idea is the most effective means to set a strong signal against global warming which is relevant to all of us. The promotion caused an enomous echo – not only in articles in the international press but especially on the internet. – vast worldwide media coverage: 80 countries counted – 234’000 Google hits four days after launch – 861’000 views of “making of” on YouTube – Greenpeace website broke down due to massive page hits. 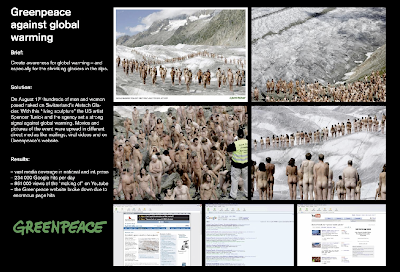