The primary objectives were to generate as much interest as possible that would drive consumers to the restaurants to try the new Big ’N’ Juicy hamburger. An essential insight is that a low-involvement product such as hamburgers is not something consumers are likely to invest time or cognitive resources in. Plus, they are used to being exposed to images of hamburgers, since this is how McDonald’s and competitors are most often portrayed. Therefore, they had to find a different way to grab attention and interest. By showing the burger’s primary product attributes, its size and juiciness, from a new and fresh perspective, they could involve the consumers on a whole different level. Also, they were determined that if you do it in a very unconventional way and let consumers take part in the advertising and draw their own conclusions around it, the potential effects should be so much higher. Large adshels were rebuilt to resemble gigantic serviette dispensers. Huge serviettes, with a very simple message together with McDonald’s logotype printed on them were put inside the dispensers. Thereby, the size of the hamburger was communicated without actually showing it and it’s juiciness was also implicitly shown. The serviettes were made easy to pull out and take home. Each dispenser were re-filled with approximately 20 serviettes each day, which means that many people actually took one (and even more people saw it). Since solutions like this one has never been executed in the Swedish market, it had great novelty value as well. Blogs and other sites all over the world picked up on the media solution. Furthermore, and most importantly, the Big ‘n’ Juicy sales were a success. 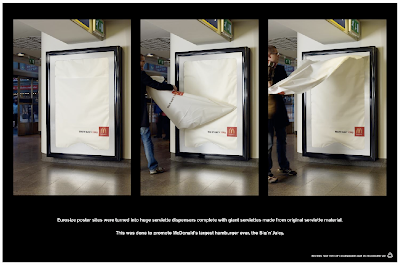 Posted by Marc van Wageningen at 11:20 AM