In August 2008, the Games Convention - Europe´s biggest electronic gaming trade fair - was being held in Leipzig for the last time, before being moved to Cologne (Messe Köln) next year in 2009. PlayStation wanted to say farewell to the gamers, the trade fair and most importantly, to the citizens of Leipzig. PlayStation decided to send Sackboy, its current top star and main character of the new, much talked about game Little Big Planet. Sitting on packed moving boxes, he shed 15.000 litres of tears every hour while bidding farewell to thousands of people directly in the city centre. 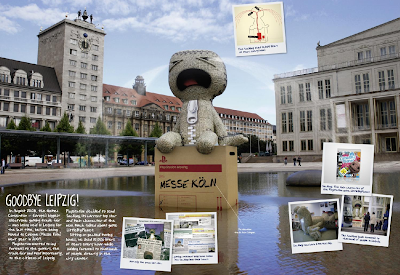