Henkel wanted to demonstrate that Pattex Clear Power Tape is an extremely strong and above all clear Power Tape that sticks to virtually any surface and resists even extreme pressure. To demonstrate the extreme strength and durability of the tape they used billboards throughout the country that looked like they were made of solid concrete. The posters were suspended using the clear Power Tape which gave the impression that they were hovering midair. Those interested were able to ask for further information about the product by using the Bluetooth facility on their mobile phones. They were also able to order a free sample of the product having first answered the question ‘How much weight can their Clear Power Tape withstand?’. With the world’s first floating concrete poster an average number of 120,000 spectators during the one-week campaign were shown in a surprising and colourful manner that Pattex Clear Power Tape really does live up to its name. With over 10,000 requested samples it became the most successful media campaign of the year. Pattex Clear Power Tape is one of the most successful products in the Henkel adhesive portfolio. 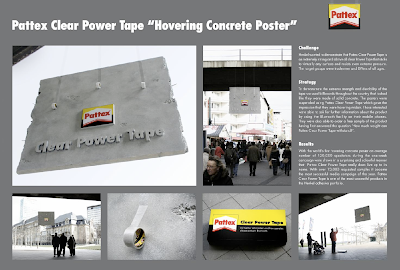 Posted by Marc van Wageningen at 11:53 AM