Their objective was to launch the iconic Fiat 500, capturing the imagination of the public and media and reinforcing the launch messaging of “Everyday Masterpiece”. In the UK, Fiat has struggled to shake off its reputation for making unreliable small cars. The launch of the Grande Punto in 2006 started to reverse the brand’s fortunes but the media and public remained unconvinced. With the brand floundering at the foot of the market share tables, the launch of the iconic Fiat 500 was seen as crucial to the future of Fiat UK. The event had to take place at a venue that could showcase the car at its best. A place that shared the car’s iconic design and engineering excellence. Most importantly, it had to be held somewhere that would attract the media and be seen by everyone. So, where better than a London icon–the London Eye. But not just at the London Eye. In it! On launch night, we threw a spectacular party. They invited 500 VIPs, 100 members of the media and 1,500 competition winners to witness the unveiling taking place 500 hours into 2008. In addition, they screened the event live into 170 Fiat dealerships nationwide. Virgin Radio hosted the evening with Mika and The Feeling providing the entertainment. At 8pm the car was revealed in a capsule at the top of the Eye and remained in there for 2 weeks. The results of the launch were truly spectacular as the event achieved £580,493 worth of media exposure and 8,500 orders taken within one month of launch. 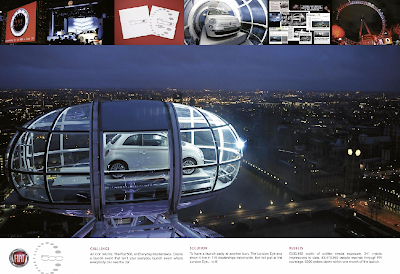