Reklamcupen is a Swedish advertising competition in a cup format organized by Sweden’s biggest daily newspaper, DN. The target group is the people in the creative agencies. The objective of the campaign was primarily to recruit participants to the advertising competition Reklamcupen. Seecondarily the objective was to strengthen the relationship between the sales department of DN and the creative agencies. The consumer insight is that the agency people are very proud and supportive to their own agency and that they like to compete. By the scarves individually designed for each agency they succeeded to be relevant and create interest for the competition. They also gave the sales department a reason to give something away to the agencies, meanwhile challenging the agencies to come up with a contribution to the contest. The scarves also were tangible and had a loing life span at the agencies, and served as a remindber of the competition for several weeks. This year the contest was held at the same time as the UEFA 2008. With that in mind they decided to give Reklamcupen a football angle. They found their inspiration in the classical supporter scarves worn by football fans all over the world. 32 different supporter scarves for the 32 biggest agencies in Sweden were made. The scarves were designed inspired by Swedish and international football teams. They matched the design for each agency with what suited that particular agency best and they were distributed through personal meetings. The projected objective was to get 24 contributions versus last years 21. The quantitative objective was to get 24 contributions, the actual result was 28. That corresponds to an increase of revenue of 17% versus an objective aggressively set. The qualitative business objective was to get a better relation and a dialogue with the creative agencies. The response from the agencies has been fantastic in terms of liking an appreciation of the campaign. The 32 agencies that received their own scarves have been commenting this on their blogs and they have really appreciated the idea. Finally, the client is very happy and think that this is the best campaign for Reklamcupen ever. 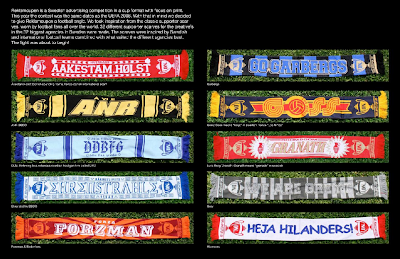