6-8.000 people in Denmark suffer from Parkinson’s, but a lot more are as relatives affected by the disease. The Danish Parkinson’s Disease Association’s purpose is to fight the disease, it’s symptoms and the side effects physically, mentally and socially. The physical symptoms are shaking and stiffened muscles, slow movements, trouble balancing and cognitive problems. Most outsiders only know Parkinson’s as “the shaking hand disease” , so the objective for this promotion was: The 11th of April is International Parkinson’s disease day. Create awareness about the fact that Parkinson’s is not only a shaking disease. To get most effect in terms of creating awareness and understanding for a limited budget, an untraditional “ambush” event was created in an apartment attractively announced for sale on and off line: With 70.000 white plastic balls and numerous custom-made everyday utilities (thermos, locks, showers, water fosses, beds etc.), they gave the unexpecting visitors a hands-on experience of what it means to suffer from Parkinson’s disease. This also proved the campaign pay off: “The world looks different when you suffer from Parkinson’s”. The media strategy was to broaden the public understanding by creating a push media strategy, where people would be exposed when they had their “filters off”. The insight for creating awareness was to give people a hands-on understanding of the disease: To prove the pay off “The world looks different when you suffer from Parkinson’s” they tapped in to the huge numbers of people looking for new apartments. They used the usual real estate channels to get an audience for our communication. The Danish Parkinson’s Disease Association reports that the promotions was effective within and beyond their strategic and tactical objectives: The campaignweek generated more awareness than the association usually gets in a whole year. The website experienced twice as many visits during the campaignweek. A 30% weekly increase in membership subscriptions was obtained – with numbers still rising. Potential members (patients and relatives) are now aware of the association’s public work. The promotion helped move the association’s dusty image of “old men shaking” giving the surrounding world a deeper understanding of Parkinson’s disease. 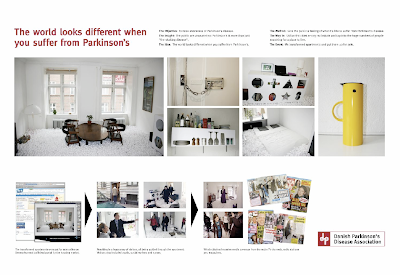