Volkswagen dealer Martin Schilder, one of the largest car dealerships in the Netherlands, was in serious need of 6 mechanics. Their job was to find them. Regular ads run the previous 6 months had failed to find the mechanics. And there was not much left in the advertising budget. So they sent 2 young women in an old Volkswagen to several car repair stations. They asked if a mechanic could take a look under their car because of a strange sound. Every mechanic immediately put their car on a lift to take a look. There they saw their hidden message: 'Wanted: Mechanics. www.martinschilder.nl'. This whole stunt was filmed by a hidden camera and put on the internet as a viral. With a lot of free publicity as a calculated consequence. The mechanics were very surprised when they saw the hidden message underneath the car and often asked colleagues to also take a look. The viral film was posted on a lot of car related websites and a lot of free publicity was generated, not only in all kinds of car dealer magazines, but also in regional newspapers and even in the largest national newspaper. This publicity was planned and hoped for. By doing so they could reach more mechanics than were actually visited. The 6 mechanics were found! 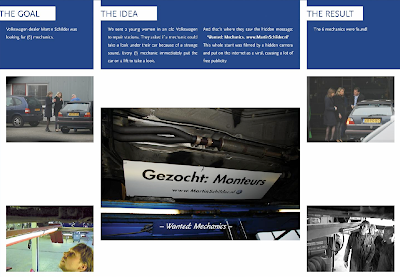