MINI "The Other Test-Drive"

Riding a MINI Clubman is all about its unique driving experience. But spots or conventional print advertising can only talk about how it feels like to take a MINI test-drive. For the launch of the MINI Clubman they wanted their target audience actually to feel how much fun it is to drive their new car. So they created the first virtual test-drive by combining their cinema commercials with new motion tracking technology to an engaging physical experience. For the first drive-it-yourself advert local cinemas were turned into their virtual race tracks during the commercials before blockbusters and sneak previews. A motion sensor captured the audience's movements and turned them into steering impulses which allowed the audience to drive the MINI Clubman through the challenging track on screen via their body movements. Cinemas are relevant meeting points for young people and early adaptors. By turning every commercial before relevant films into a thrilling test-drive and by providing this unique fun experience they involved their target audience. After they passed the finish line they invited them to a real test-drive at their local MINI dealership. The back of the cinema ticket served as an additional response element. The race on the virtual track transformed the normal cinema commercial break into a thrilling test-drive. With enormous response: 10.000 passed out tickets with invitations led to 32% increase in test-drives at local MINI dealers. 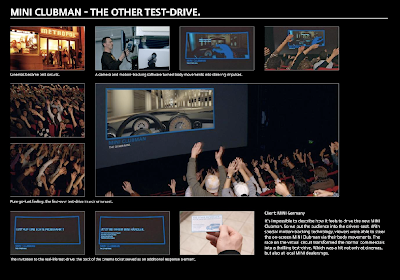