With the luxury car market facing declining sales, it has become more important than ever to attract new buyers rather than just up-selling existing drivers. Unfortunately, BMW's competitors in this price bracket ­ like Porsche ­ tend to have fiercely loyal customers. Previous attempts to contact these conquest prospects had achieved dismal response rates. Subvert the traditional car launch process and ask prospects to review the car ahead of journalists. They sent Porsche drivers a mysterious package containing an mp3 player. There was no branding on the pack - the only clue was the German postmark. The mp3 message (in authentic German accent) spoke to people individually by name and invited them on a top-secret sneak preview test drive. Respondents were chauffeured one by one to a private airport, where they unveiled the new BMW X6 and recorded their comments on camera. They filmed each person with a dashboard camera as they put the X6 through its paces on the runway, and then edited the footage so that each driver had their own personal review on DVD. The most satisfying result was capturing Porsche drivers on camera raving about BMW. But the results also stacked up from a numbers point of view. A staggering 72% of these completely cold prospects said YES to a test drive. This was the most overwhelming response BMW has ever had in New Zealand. So overwhelming, in fact, that they had to stop mailing when they were only halfway through the list. 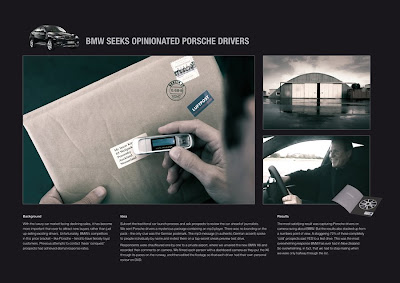 Posted by Marc van Wageningen at 10:27 AM