The UEFA EURO 2008 in Austria and Switzerland ranks alongside the Olympic Games as the largest sporting event in the world in 2008. And adidas wanted to be the number 1 football brand, sending their “Impossible is nothing” message far beyond the borders of the two countries. Strategy: Don‘t merely show pictures of famous football players. Bring the footballers closer to the fans and the fans closer to them. Let each fan feel like a fly on the wall, as the tension reaches a crescendo, just seconds before the beginning of the match. They created a 17 m high, 33 m wide, 3 dimensional 11 man huddle featuring the best players of the tournament in Switzerland‘s most frequented location: the Zurich main train station. A 14 tonne place of pilgrimage that was 10 times larger than the wax figures on display at Madame Tussaud‘s in London, Hollywood or Berlin. But every bit as detailed. During the European Championships, the Huddle evolved into a landmark where fans of all nations took millions of pictures and films and celebrated their passion for the game. The Swiss rail authority reported an estimated overall audience of over 13 million people over the course of the three weeks. The Impossible Huddle was launched live on N24, a European news network, and was on major stations throughout the continent within hours. Major news titles such as BBC, Financial Times, Die Welt, Gazetta dello Sport, Le Parisien and NRC Handelsblad featured it on their front pages or online editions. It was discussed on hundreds of websites, blogs and advertising journals throughout the world. Online communities such as facebook and youtube featured groups and posts honouring the Huddle, as well as user-generated short films inspired by it. And one week before the final, the press declared adidas the winning sports brand of the UEFA EURO 2008. Recognized by 30 % of the audience, as compared with 12 % for competitors, they reported an increase of 50 % in the football apparel sales, earning them an estimated 15 % added market share. 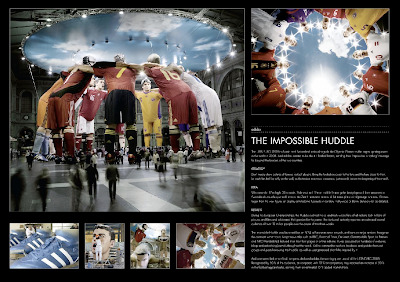