Stage an event for the biggest day in Kosovo’s history - The Declaration of Independence. At the same time avoid any instance that would uproar the crowd and yet provide a joyful manifestation. They were given 10 days to complete the project. They identified the event with a symbol that would be part of this day and the people that gathered around it. They created a 3D interactive sculpture NEWBORN that would become the media. People used it as a tool to express all their emotions via black permanent markers, which they provided during the event. This lasted throughout Feb 17 2008. Over 150,000 people wrote on it, starting with the President and the Prime Minister. Millions accross the world saw it on TV. CNN, BBC and other major networks covered it live. The sculpture made it to the front page of the New York Times and was mentioned in major newspapers and websites around the world. NEWBORN as become a historical monument. 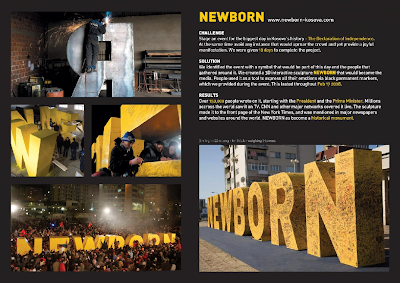