Radio station Studio Brussels is a rather small music channel in Belgium. Every summer they are present at all major music festivals. But how can you reach your target audience amidst big spenders like Coca-cola, Vodafone, Toyota and Stella Artois? Or… How can you stand out with a humble budget? By creating something that really shows you understand the festival-spirit and really care about your audience. They started from two facts. 1. all major festivals in Belgium are held on grass, the habitat of cows. 2. Youngsters use the time in between bands to sit on the grass together. So they created something completely new: a cushion, which looked exactly like a cow’s droppings. Put it in the grass on a festival’s grounds and you’d hardly see any difference with real cow’s droppings. Until … you sit on them. The campaign was entirely built around the sitshit itself. They had it promoted by Belgium’s most famous financial guru on television, radio, online and print. And at the actual festivals. On top of that ‘the sitshit’ got a lot of free press. The sitshit was for sale at every major summer festival and online for just 2 euros. It was a gigantic hit. Online sales had to be limited because demand was so high. For each festival Studio Brussels supplied a couple of thousand sitshits, which were all sold out in minutes. People lined up in long queues so they could get their own copy. The sitshit was even admitted in an exhibition of the Belgium Design Museum and in a designers’ book: ‘Forms with a smile’. The result? There wasn’t one teenager left who hadn’t heard of the sitshit … and of radio station Studio Brussels. 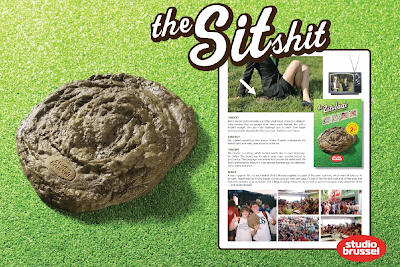