Create an impactful low budget sales promotion for the household cleaning product Cillit BANG. Communicate the product benefit in a relevant and convincing way. Success will only be measured in sales. It was a 1:1 realisation of the original concept. The promotion took place at the POS, via a very special „secondary placement“ nobody could escape: The supermarket’s cashier. Here a 5 Cent coin – half way cleaned by Cillit BANG and half way dirty – was given out as change to every consumer. The coin was branded with a little transparent sticker. Making use of the well established TVC key visual of the clean Cillit BANG-coin and taking it into real life at the POS worked as the living proof of the advertising promise „nothing cleans like Cillit BANG“. How can a sales promotion be more convincing? Small size, big effect. The results were amazing. The supermarkets of the REWE group, where the sales promotion was realized, showed a sales uplift across the entire Cillit BANG range of plus 337 % in comparison to the respective previous period. Because of the big success at a reasonable price and the highly positive involvement of the consumers a nationwide instore „Clean Coin“-sales promotion is planned for the second half of 2008. 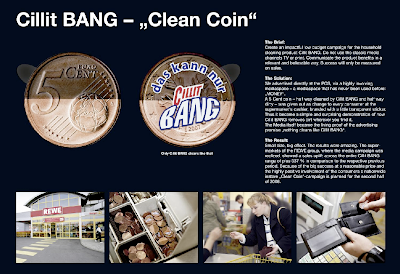