Turn the Hornbach Home improvement Stores Imagination theme into a surprising direct marketing idea, that creates loyalty among the costumers and make Hornbach sexy among the non costumers. And tell once again that Hornbach is not just another low and even lower prices retail store chain but the ultimate sheriff in the world of DIY and Home Improvement. The buzz should come from the cultural center of Berlin and let people change the way they look at DIY and Hornbach in general . It's about creating something big. It showed in a clever and surprising way what you can create with simple building materials combined with fantasy and imagination. Though the exhibition went quite far from usual renovation schemes, the HOUSE OF IMAGINATION inspired the audience to start creating their own, wonderful world. Beside all this: from the very beginning HORNBACH made DIY, Renovation, Home improvement part of the POP Culture. The House of Imagination was just another proof. They founded the HOUSE OF IMAGINATION, an old empty apartment building in the middle of Berlin and asked 12 international artists to turn the standard living rooms provided into amazing, bizarre, fantastic experiences. The artists were sound designers, Kitsch enthusiats, interior designers, performance artists etc. Besides the interesting exhibition they installed a permanent night/ music club besides an avantgarde restaurant which turned the HOUSE OF IMAGINATION into a Place to be in Berlin. They aimed at a total of 10000 people during the two weeks. They aimed at another proof that there is only DIY Store Chain that matters. More than 2,000 people attended the official opening, which once again put Hornbach on the map of D.I.Y. and cultural life in general. The event drew attention worldwide and made Hornbach stand out from the massive field of competitors who usually focus on low prices. In total 18.000 people showed up to see the HOUSE OF IMAGINATION exhibition. Sales at the 11 Berlin Hornbach Stores increased by 30% shortly after the massive press echo and word of mouth. 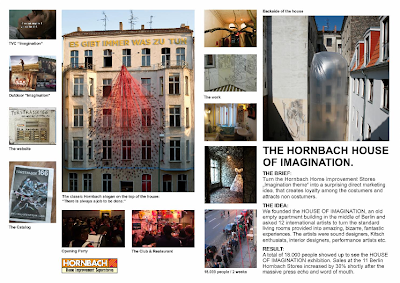 Posted by Marc van Wageningen at 11:50 AM