The best thing about dinosaurs is that they are real, they lived. They wanted to give people a real adventure, not a classic advertising campaign. The campaign triggered huge enthusiasm. People engaged in a huge quest to find the bones. It ran almost exclusively on word of mouth. No classic advertising materials were used to promote it. The target was youngsters. Kids and teenagers. That is why the bones were buried in school gardens and parks, in 5 different Romanian cities. The curiosity and energy that youngsters have also ensured the succes of the campaign. Free media coverage in the most important TV stations and newspapers. The number of visitors tripled compared to the same period of 2007. 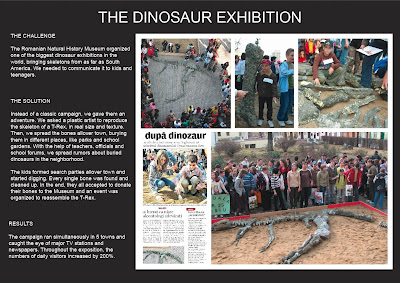