Their brief was to develop a communication strategy that would draw attention to capital punishment, and would support the Amnesty International stand in Frankfurt / Main, where volunteers collected signatures for petitions against capital punishment. Budget for execution: 4000,- €. This kind of creative execution brings the cruelty of capital punishment out into everyday life in a highly direct way. The sheer scope and immediacy of the impact was virtually impossible to ignore. They developed an installation in Frankfurt/Main. On the busiest street in the city they hung 20 gallows from streetlights – one for each person who is executed each day (according to official estimates). This kind of communication brings the cruelty of capital punishment out into everyday live in a highly direct way. Two banners across the street communicated the key messages to passers-by. To support the installation and to get more signatures against capital punishment, we also created a microsite from which people could download the petitions. In keeping with their client’s modest communication budget, their installation was highly cost effective: they achieve more than 40.000 visual contacts every day, also attracted TV and press reporting. More than 1 million contacts through TV and newspaper coverage. More than 20.000 petitions signed. 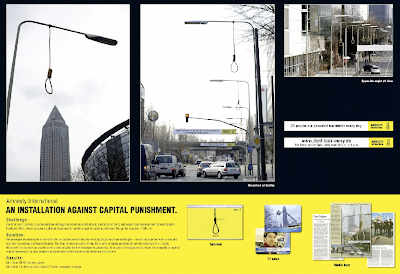 Posted by Marc van Wageningen at 11:00 AM