Gerolsteiner is the leading water brand in Germany. But it’s almost inexistent in Belgium. The brand didn’t communicate since years, the awareness was very low. They found out nobody in Belgium was named ‘Gerolsteiner’. So they launched a simple, but challenging competition: the first person who officially changes his name to ‘Gerolsteiner’ receives a Porsche 911. Gerolsteiner pays for all the administrative costs attached to officially changing your name. They urgently needed to do something about their brand name awareness, …and they took it quite literally. Gerolsteiner got huge exposure and enormous amounts of free publicity. Thousands subscribers wanted to change their name. The word was spread on the streets and so was the name of their brand. And altough the competition is still going on, the campaign already turned an unknown brand into a big … euh… name. 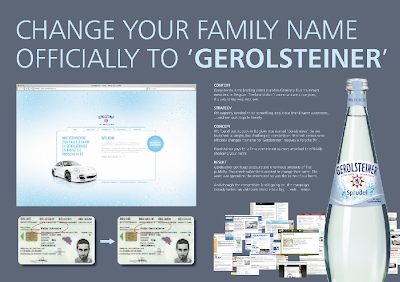 Posted by Marc van Wageningen at 10:55 AM